During our residency at Les Moulins de Paillard as part of the E-textile summercamp in 2016 we were working on the future vision of eTextile and technology. The topic was about the lack of story telling. Can we create the story of future with eTextiles with the help of design fiction/speculative design as method? Is it going to be a Utopia? or a Dystopia? After discussions on this topic we decided to tell a story around wool and develop prototypes for it.

WOOL PUNK is a term used to describe a movement originating in 19th century Scotland that invented a new form of power generation and harvesting using wool. A small isolated community developed this methodology after discovering curious electrical properties of the wool produced by the Scottish Dunface sheep in the highlands. We believe that they found that when friction is applied to this wool, it generated a substantial triboelectric effect that they could use to power machines. This knowledge permeated their lifestyle and culture, allowing them early insight into technologies that would not emerge for decades.

Almost all traces of this community were lost after a brutal suppression by the British Crown at the end of the 19th century. We have reason to believe the WOOL PUNKS led a massive resistance campaign up through the mid-twentieth century and that they may still exist today. Through our research, we have unearthed various clues that give us insight into their lifestyle before and after their disappearance. This website seeks to understand the history of the WOOL PUNK and it’s evolution into a secret society. It is also a repository for documenting cultural artefacts and the techniques used to create them. Indeed, it is these wool and electronic techniques that make this community so compelling and enigmatic.

Aniela was particularly interested in creating different skins with wool and looking into its properties. Could she develop an energy harvesting skin? What are other benefits of using wool? Since WOOL PUNK was an underground society, she developed the concept for a jacket that takes care of the wearer, but in a more natural way. To apply the wool onto a semi-transparent piece, she started with some needlepunching tests. In this way, it could also appear that wool was growing out of the body. The jacket has all kinds of references to coding tartans.

The jacket is made with wool fibers which contain lanolin. By lighting the lanolin with ultraviolet light from the sun, lanolin will turn into vitamin D3, which is needed for the wearer. This jacket has an UV-sensor, so the wearer knows when (s)he has collected enough sun to have vitamin D in their body. Then the buzzer will go on and it is time to go underground. The sensor and buzzer are powered by rubbing onto the wool to generate energy. Underground the phosphoresent logo will go on and we enter the secret space with a conductive handshake. 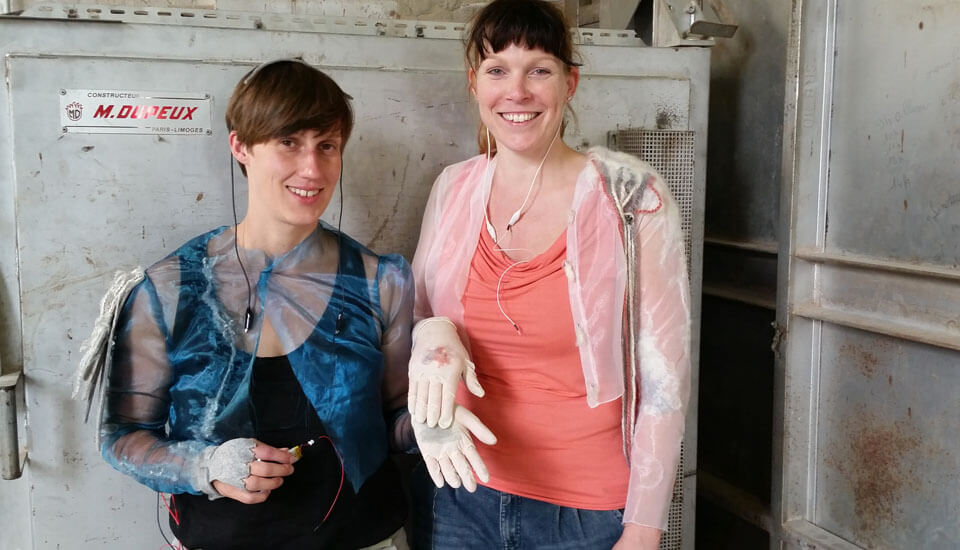