The color of micro-organisms (fungi, bacteria, algae, and such) is due to different coloured substances in the cells. For instance, bacteria use variants of chlorophyll (the green in plants) but absorb light of different wavelengths creating natural colours of purple, pink, green, yellow, orange, and brown. At the wetlab of Waag Society I have done some experimentation with bacterial ink (bacteria which produce pigments) to see how I could dye fabric with them. Three bacteria are tested on pure Nutrient Agar (NA), polyester and cotton, both boiled in NA. 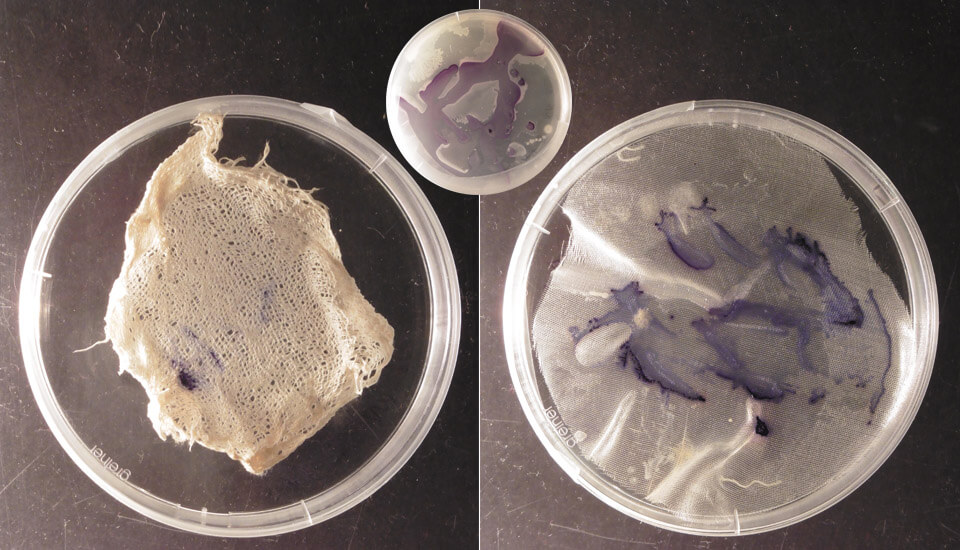 Janthinobacterium lividum is an aerobic, gram-negative, soil-dwelling bacterium that has a distinctive dark-violet color. This color is due to a compound called violacein, which is produced when glycerol is metabolized as a carbon source. Violacein has anti-bacterial, anti-viral, and anti-fungal properties. Its anti-fungal properties are of particular interest since J. lividum is found on the skin of certain amphibians, including the red-backed salamander (Plethodon cinereus), where it prevents infection by the devastating chytrid fungus (Batrachochytrium dendrobatidis). The genus name, Janthinobacterium, comes from Latin janthinus, which means “violet” or “violet-blue” + bacterium, which means rod or staff. The species name is also from Latin, lividum, which means “of a blue or leaden color”.
colour = purple

Xanthomonas campestris is an aerobic, Gram-negative rod known to cause the black rot in crucifers by darkening the vascular tissues. Host associated, over 20 different pathovars of X. campestris have been identified by their distinctive pathogenicity on a wide range of plants including crops and wild plants. This bacterium is mesophilic with optimal temperature at 25-30 degrees Celsius and inactive at temperatures below 10 degrees Celsius. X. campestris have Hypersensitive response and pathogenicity (Hrp) pili that help transfer effector proteins to decrease the host’s defense and glide through water. They can live in a soil for over a year and spread through any movement of water including rain, irrigation and surface water. Spraying healthy plants with copper fungicides may reduce the spread of the bacteria in the field. However, once the plant has been infected, X. campestris will eventually spread to the seed stalk inhibiting the growth of a healthy offspring.
By pure culture fermentation, X. campestris can produce an extracellular polysaccharide known as xanthan gum that is commercially manufactured as a stabilizing agent used in many everyday products including salad dressing or toothpaste.
colour = yellow 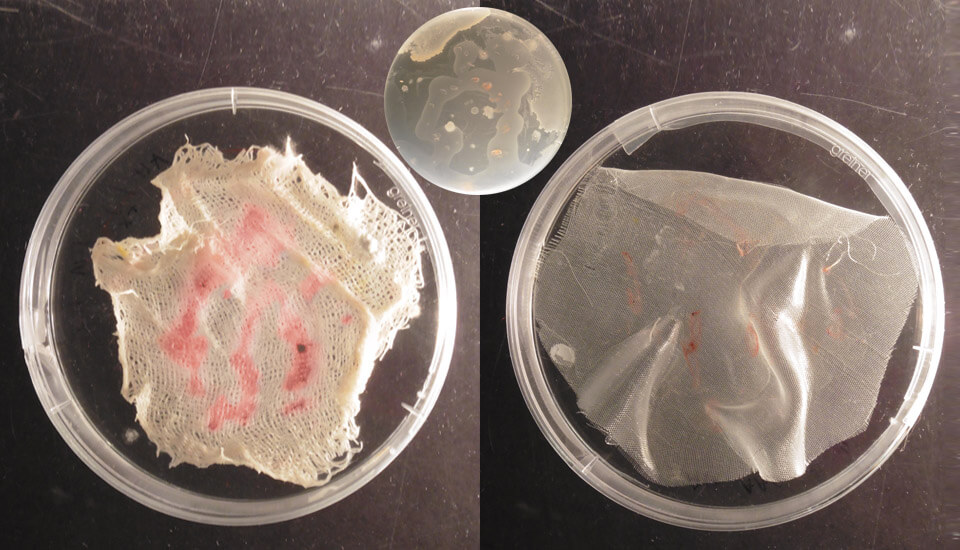 Arthrobacter agilis is a psychrotrophic bacterium species from the genus of Arthrobacter which occurs in lake water and Antarctic sea ice. It produces dimethylhexadecylamine and carotenoid. A. agilis is a plant growth promoting and cold active hydrolytic enzymes producing psychrotrophic bacterium, isolated from Pangong Lake, a subglacial lake in north western Himalayas, India. Genome analysis revealed metabolic versatility with genes involved in metabolism and cold shock adaptation, utilization and biosynthesis of diverse structural and storage polysaccharides such as plant based carbon polymers. The genome of A. agilis strain L77 consists of 3,608,439 bp (3.60 Mb) of a circular chromosome. The genome comprises of 3316 protein coding genes and 74 RNA genes, 725 hypothetical proteins, 25 pseudo-genes and 1404 unique genes. The candidate genes coding for hydrolytic enzymes and cold shock proteins were identified in the genome. A. agilis strain L77 will serve as a source for antifreeze proteins, functional enzymes and other bioactive molecules in future bioprospecting projects.
colour = pink